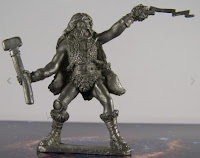 Next out of the Lead Mountain was this unfortunately incomplete chappie. I had acquired him as part of a job lot, and he came without either of his hands - Grenadier went through a period of casting their figures in multiple pieces, and the smaller components nearly always got lost. He should be holding a hammer in his right hand, and casting a lightning bolt in the other - see the picture to left for how he should look. Originally I was going to sell him on, but then I realised I had a need for a Storm Giant character my current D&D campaign, and decided to try my hand (no pun intended) at a conversion. 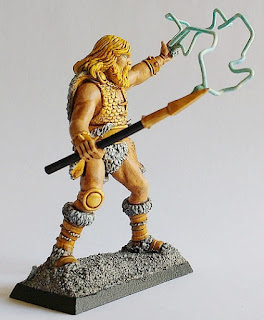 The main issue was scale, but I was pleasantly surprised to find that a lopped off hand from a GW Chaos knight, holding a spear, worked really well for his right hand - a bit of superglue and a bit of Milliput worked wonders. I was a bit stuck for a left hand - he definitely looked like his arm was raised to do something - and then I thought, "what if he is generating lightning from his left hand to charge the tip of the spear in his right hand"? A bit of digging produced the left hand of a spare Chaos sorcerer from HeroQuest, and again superglue and Milliput came to the rescue - however, the scale of that left hand was a bit smaller than the other hand from the Chaos knight, but I hoped that it would be disguised with what I had in mind. I wanted to present two electrical bolts coming from his left hand to the tip of the spear, and for that I used two paperclips, bent into the relevant shapes, and then fixed them with superglue between the left hand and the spear tip. 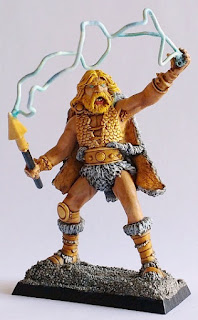 After that... the paint job. The white primer covered a multitude of sins, and then it was just a matter of keeping it simple - base colours where possible, then a wash of Army Painter soft tone to bring out the detail, and then dry brushing to bring out the highlights. The most difficult bit were the electrical bolts, which were originally light blue, and I overdid the dry brushing so that they almost appeared white. I also did the eyes of the figure in the same colour to give some continuity, and also to emphasise the strange, other worldly appearance. 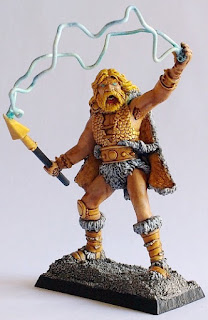 I am very happy with this figure, especially when you consider it is conversion and nearly got passed to someone else. Definitely a major player in my D&D Campaign!