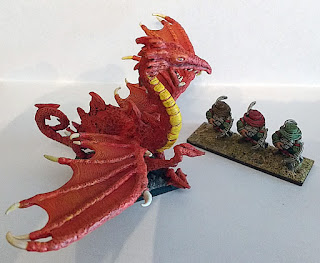 And a (very) belated Happy New Year... a number of unfortunate events in life have meant I haven't had opportunity to pick up the brushes recently, but hopefully normal service will be resumed. Next out of the Lead Mountain was this beastie. Minifigs were one of the earliest manufacturers of fantasy figures in the UK, and their focus was on producing miniatures that would be used to reproduce fantasy battles, rather than RPG characters - this meant that when the D&D craze kicked in, Minifigs tended to be get left behind. They did try and adapt - their later figures were actually quite good - but it was too little, too late, and they faded quite badly. Certainly their early figures look very simplistic, almost like toys. This is one of the later ones. Now, I usually avoid larger winged figures - they fall over, the wings get broken off, and they gather dust - but I wanted to see how well this held up after 30 years! Assembly wasn't that easy - the wings needed pinning in, and then superglue and Milliput to fill in the gaps - and the entire figure needed to mounted on a square base to stop it toppling over. After that, the paint job, and the golden rule with older minis - keep it simple. Base red and yellows, and then a ink washes to bring out any details... which was a mixed bag. The wings came up well, but the torso less so - instead of scales the sculptor had gone for an unusual "lumpy" style, which didn't really respond too well, and the ink tended to pool. Dry brushing and highlights helped a bit, and after that it was a matter of picking out the detail on the head - mostly the eyes and teeth. I'm fairly happy with the result, and I really like the figure - the pose is great, and some of the sculpting is excellent, especially around the head - but the lumpy torso and the lack of detail on the claws is a bit of a disappointment. Still, as a generic dragon for encounters it will do just fine - the Asgard crossbowmen look suitably worried - and considering it is over 30 years old, I think it holds up pretty well! 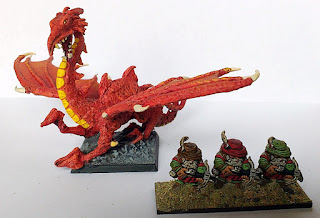 Bit of a gap between postings, but that's what a new job and Christmas does for you :) I've hardly had time to paint in the last month, but I thought I would post the latest extract/rescue from the Lead Mountain. I got this figure as part of a job lot, and it was in a sorry state - it was missing its wings, and the original right hand had been hacked off. Now, I am a big fan of Ral Partha sculpts - they are light years away from the Asgard and Grenadier sculpts of the same era - and I thought this was too good to bin. So, out with the bits box... in particular, the plastic Gargoyle from HeroQuest. I had a spare one lying around, and the wings from it were a surprisingly good fit for the back of the Balrog - a bit of superglue and Milliput sorted out any annoying gaps. The missing right hand was also sorted by snipping off the wrist of the same Gargoyle and pinning it in place - the hand is a bit out of scale for the rest of the figure, but I can live with that. After that, white primer, a bit more filling, and then out with the paints. As with all early sculpts - the trick is to keep it simple, so a base red, then a dark red wash, then dry brush to bring out the detail... including the rather obvious dangly bits (!). Maybe the Balrog and the Citadel Troll discipline master should get a room... The base of the figure is just shards of rock, painted light gray, then a dark wash, and then dry brush with red to suggest heat from the Balrog. The wrist band and the sword were painted in gold to suggest polished bronze (and also to reflect well with the red), whilst the whip was done is various light shades of orange, yellow and white to suggest heat. I'm pleased with the way this turned out - especially as it is a rescue piece - and considering it is nearly 30 years old, I think it holds up really well. Certainly the latest recruit to my Amazon/Shadowforge army looks worried by it! 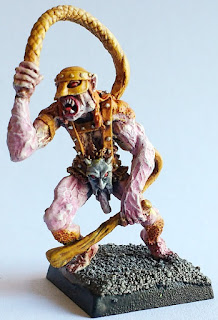 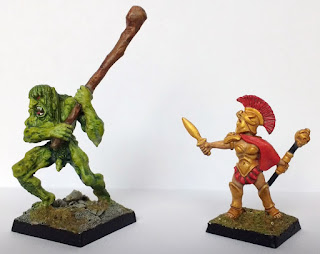 And staying with Citadel... next out the Lead Mountain were these fine fellows. Now, my understanding is that these were sculpted by Tom Meier, and had a degree of notoriety due to their frank depiction of Troll genitalia. They don't leave much to the imagination, especially with the mild bondage elements of the Discipline Master! The series didn't sell well and was replaced fairly quickly by a second C20 series of trolls sculpted by Jes Goodwin, which were more in the traditional "cartoon" Citadel style... and also clothed! As a consequence the original Meier C20 trolls are comparatively rare to find (not surprisingly, one might say). They are actually lovely figures to paint - well detailed (a bit too much so maybe...!) and with little or no flash (fnar fnar). Base colours, ink wash, and dry brushing - job done. I think the Troll attacking with a Tree trunk is the better figure, and is more likely to see table top time as a generic "WTF is THAT" encounter - I think it still holds up really well against more recent figures, such as the latest addition to my Shadowforge Dark Temple/Amazon army - but the Discipline Master is probably a bit too specialised for use. It looks like an outtake from "300" to be honest. Potentially it could be used as a boss encounter, but in all likelihood it will be moved on to a certain auction site... 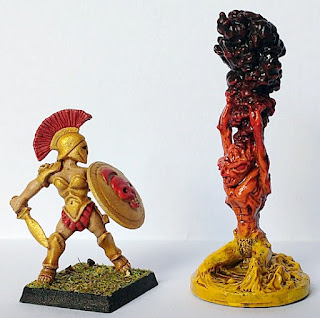 Due to a number of factors, it's been a while since I last posted - but I have been painting in that time, so I have a backlog of minis to share with you, starting with this one. Before they mutated into Games Workshop, Citadel did some cracking figures in the mid-80's, including this one. I acquired it as part of a job lot, and it had been broken to it 3 (count 'em!) pieces. So - out with the superglue and filler. Fortunately the later Citadel figures had really good solid bases, so this figure was unlikely to fall over and break like so many Asgard figures. After that - the paint job. Basically the idea was that source of the fire elemental would be the base, hence the lighter (hotter) colours being there, and moving up to darker colours until we ended up with a thick black cloud of smoke from its hands. This was more difficult than I imagined, and I think perhaps transition between colours was as successful as I hoped for. I also kept the initial gloss varnish on the figure as it makes it look more fluid on the table top, but it doesn't make it as attractive in photos. I may revisit this figure and apply matt varnish. I still think it's an imposing figure, especially next to the latest recruit for my Amazon army, and I can see it getting plenty of tabletop time. Not bad for a piece that was original destined for the bin!
Posted by Caliburn at 15:00 4 comments: 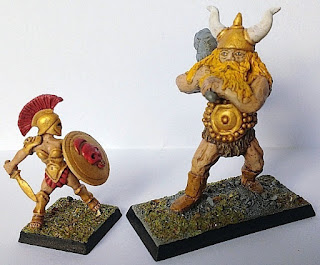 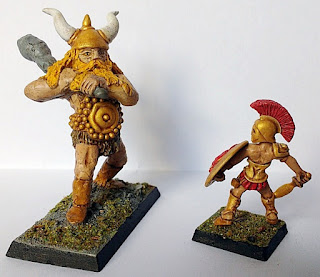 And next out of the mountain was this chappie. Now, Asgard did some great sculpts, some absolutely dreadful ones, and a awful lot of so-so ones. This is one of the so-so ones. As with all of the bigger Asgard sculpts, you get a lot of metal - compare it against a Shadowforge Dark Temple warrior/latest recruit to my Amazon army - but not a lot of quality with the sculpt itself, as they tend to be really coarse. It also suffered from having a base that was too small for such a top heavy model, which meant it kept falling over. So, once fixed to a plastic base - out with the brushes. Originally I was going to paint it as a Frost Giant, but in the end was swung by the name - "Norse Giant", and decided to paint him in human-like colours. I know a bad workman blames his tools, but the ink washes really brought out the coarseness of the sculpt, and even some vigorous dry brushing couldn't save things. I'm not especially happy with the figure at all - it's a bit static, and I can't think of any giant-based scenes where a Norse giant could appear. Perhaps I should have painted him as a Frost Giant. Can't see him getting too much tabletop time, and probably appearing on an auction site soon. You win some, you lose some... 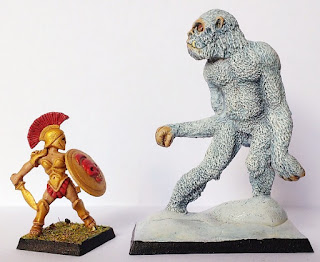 And staying with Grenadier... next out of the Lead Mountain was this fine fellow. Grenadier went through a phase in the mid-80s of trying to produce figures for every eventuality, resulting in things like giant skeletons with scythes. This figure hails from the same era, and is a bit of an oddity. For starters, look at the size of it - it is huge, at least giant sized in comparison to the latest recruit to my Amazon army. I know polar bears are big but this is faintly ridiculous - what on earth is something that size going to live on, especially in frozen and/or mountainous environments? Anyhow, out with the brushes... It was actually a pleasure to paint, a base coat of white, then a wash of light blue to suggest ice and frost, and then lots and lots of dry brushing white over several nights. The paws and face were picked out with flesh tone mixed with white and just a hint of blue, whilst the eyes were done with my trademark chaotic red. The base is simply fine Milliput painted white, inked light blue and then drybrushed. I was quite please with the way this turned out, and I actually like the sculpt, but I do wonder how much table time it will see - not much call for yetis in my campaign!
Posted by Caliburn at 12:36 4 comments: 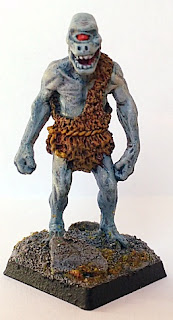 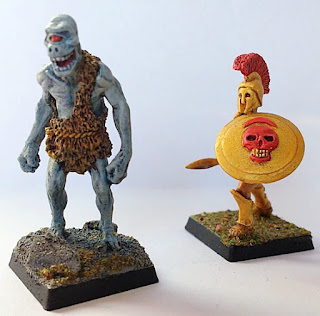 Early Grenadier sculpts tended to be very primitive - crude, and often naive - but later sculpts were a lot better, especially when they got John Dennett involved. Now, not everything he did was good, but I think this is one of his better pieces. It was an absolutely pleasure to paint - just base coats of white for the skin and brown for the fur, followed by a wash of GW nightshade to pick out the detail, and then dry brushing with light blues. I really liked the way the skin tone came out on this - I wanted to suggest something unnatural living in a cave and gnawing on sheep bones, and this worked pretty well! I think this looks like something that Ray Harryhausen could have dredged up for a film about Greek mythology. Just not sure about the name though - what's that all about? It's obviously a Cyclops, and I'm pretty sure the name isn't trademarked. Very please with the way this turned out, especially when placed next to the latest recruit in the Amazon army!
Posted by Caliburn at 09:59 4 comments: